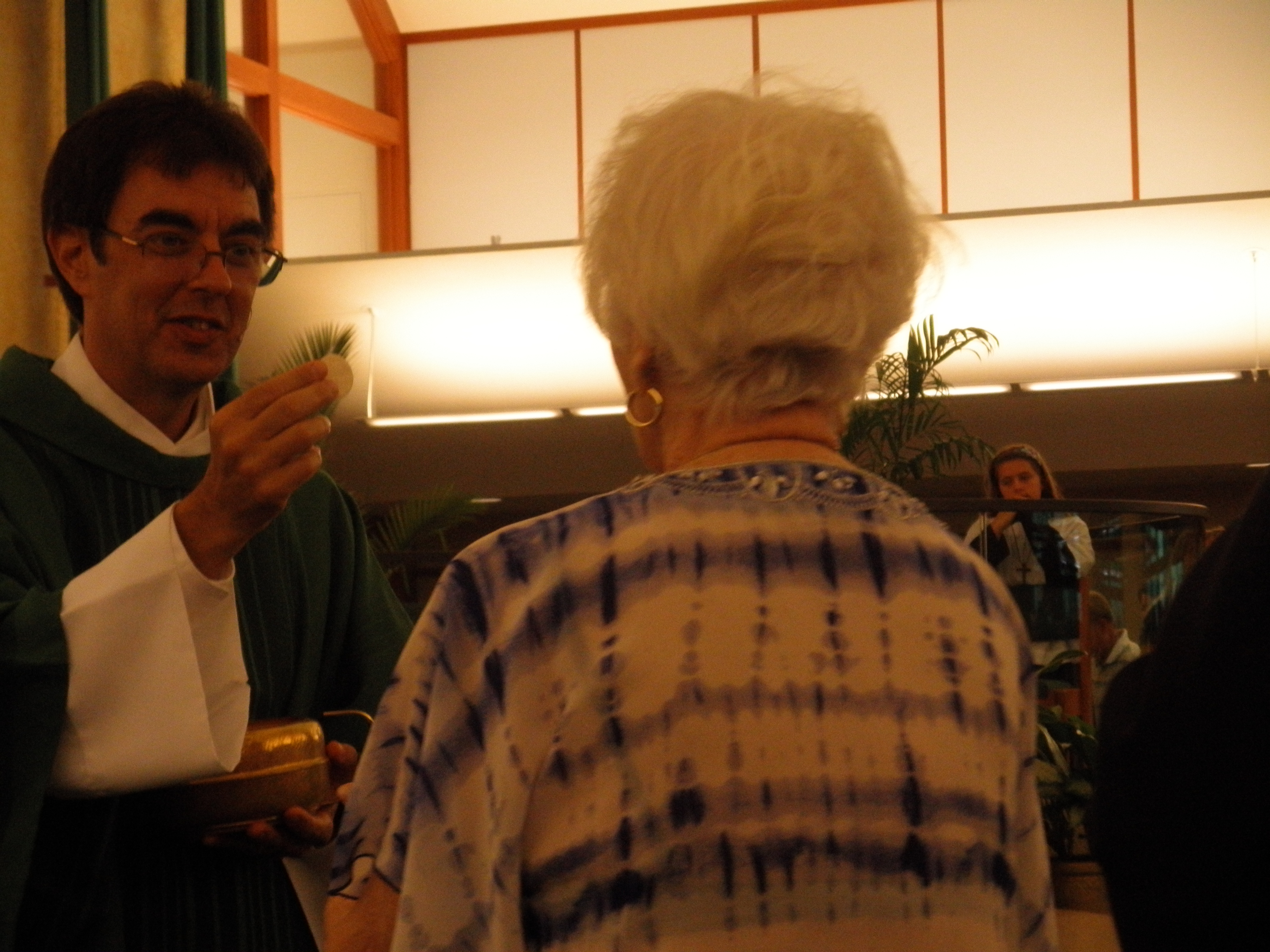 The Body of Christ

Even though Jesus had fed the five thousand and they were satisfied and there was plenty more where this gift of grace came from. Even though they followed Jesus to Capernaum seeking a sign, the discourse regarding eating his Flesh and drinking his Blood was just too far of a stretch for these followers to take. In fact: Not only did many of the disciples of Jesus who were listening say, “This saying is hard; who can accept it” (Jn 6:60)?, many of his disciples walked away from Jesus at that point.

Jesus had gone too far. Even though just a day before they were ready to embrace him as the Messiah and move to make them their king, they could or would not believe because they did not fully comprehended who Jesus said he was, the One from above, who was sent by the Father. They had not yet developed a deep enough relationship with him such that, even though this teaching was unimaginable, unintelligible, as well as abhorrent, they couldn’t continue to stay with him any longer. Jesus didn’t adjust his words, recalibrate his meaning, didn’t go after them. Jesus spoke the truth with blunt force and let them accept or reject the invitation he offered.

Jesus then offered the same clear choice to the Twelve, “Do you also want to leave?” Simon Peter answered him, “Master, to whom shall we go? You have the words of eternal life. We have come to believe and are convinced that you are the Holy One of God” (Jn 6:67-69). Peter’s response is one of faith and trust. I am sure that Peter and the other eleven reacted in the same way, but their relationship was on solid enough ground such that they were able to still trust in Jesus. They believed he was who he said he was, “the Holy One of God.”

May this be our response as well. When we find some of Jesus’ teachings hard to digest, hard to put into practice, we need to resist the temptation to walk away. Instead may we follow Mary’s model of pondering, as she did when Gabriel shared she would bear the Savior of the world. She did not fully comprehend what the message meant, but she trusted God and said yes. May we follow Peter, who consistently, dealing with mixed emotions and doubts, impulsive behavior, putting his foot in his mouth on more than one occasion, remained firm in his belief in Jesus because he trusted that Jesus was the “Holy One of God”.

When we do not understand, may we dialogue with each other, read commentaries and the teachings of the Church to better understand the context, but above all, go directly to Jesus, bring our concerns and questions to him. May we consistently pray and be open for his answer, even directly from Jesus himself in the silence of our hearts. Often times we experience an aha!, or eureka moment from another person sharing an insight from a different perspective. We come to understand better the teachings of Jesus through graced moments of revelation when we remain trusting and open to God.

Peter kept the lines of communication open with Jesus. He misunderstood early on more than he understood, yet, he did not leave Jesus. Peter kept coming back. The persistence of Peter and his openness, as evidenced in today’s Gospel, when he answered Jesus regarding the option to walk away from him or not, Peter said: “Master, to whom shall we go? You have the words of eternal life” (Jn 6:68), is what allowed him to also be open to God speaking through him when he replied to Jesus’ question, “Who do you say that I am?” and Peter replied that Jesus was “the Messiah, the Son of the Living God” Jesus followed with the words, “flesh and blood have not revealed this to you, but my heavenly Father” (cf. Mt 16:16).

That is exactly the point. In seeking to understand Jesus, his teachings and his Way, especially when they are hard, may we trust that he will accompany us each step of the way. Jesus does not give us burdens just for the sake to bear them, nor will he leave us to carry them alone. The gospels are very clear on this. Where Jesus invites us to go and what he requires us to do, he will provide the grace, strength and perseverance we need, when we are willing to trust in him and call upon his help.

The grace of God builds on our nature, Jesus meets us where we are and leads us to actualize our potential and intellectual capacity to understand. He does not want us to be blind followers, but to be engaged critically with what he demands while at the same time trusting in the will of his Father. Our intellect and reason will take us to wonderful heights, but only so far. Jesus speaks to us in human words, but also through “spirit and life” (Jn 6:63). To come to understand the teachings of Jesus such that the Eucharist is his real presence, we need to access both our faith and reason.

Jesus is not asking us to do anything he himself has not done. Jesus requested that the cup of death his Father asked him to drink could be taken away, a hard teaching if there ever was one, but Jesus was willing to submit his human will to the will of his Father. He was able to do so because Jesus trusted his Father and knew he would bring about a greater good.

Jesus gave his life, died and in so doing conquered death, transcending the time and space of our present dimension so to be present to us in the Sacrament of the Eucharist as he promised and as is recorded that he would do in John chapter 6. May we take some time to read this chapter meditatively over this week and ask God to reveal to us the fullness of the gift that Jesus offers to us daily, himself. Jesus lives. Jesus is the first born of the new creation, and he wants to not only lead us to eternal life, but impart his life in us that we may experience the Love and Mercy of his Father now, so to be one with him in this life and for all eternity! Let us trust and believe in the Risen One, for he has the words of eternal life. Amen?

Photo: Serving Jesus at my first Mass after ordination