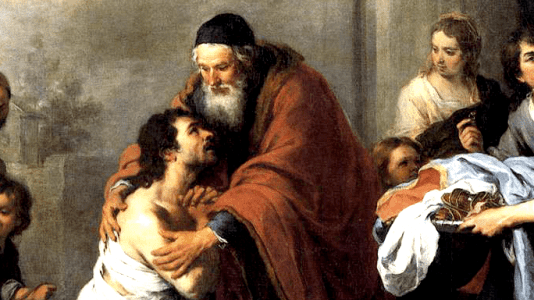 God is running to embrace us.

In today’s Gospel from Luke we encounter the well known parable of the Prodigal Son. With the parables it is important not to skip over who Jesus is talking to, just so we can dive into the parable itself. Jesus is speaking to tax collectors and sinners. They are drawn to him. The Pharisees and scribes are also present. They are drawn to him also, but are complaining.

With these two groups now focused on Jesus, he shares his parable. Three main characters are present in the telling, the younger son, the father and the older son. The younger son represents the tax collectors and sinners. They have embraced the sin of Adam and Eve in taking for themselves that which God would have freely given to them. They have squandered their inheritance and separated themselves from the relationship and love of God. Yet, as the son realized, the tax collectors and sinners are coming to see, that all that the material life offers is limited, and it does not fully satisfy. They, like the younger son who returned from the “distant country”, are prepared to come home.

The wonderful light and joy of the parable is that: “While he was still a long way off, his father caught sight of him, and was filled with compassion.” The father then did the unthinkable as: “He ran to his son, embraced him and kissed him” (Lk 15:20). The father never held a grudge, but also never gave up or stopped looking for a sign that his son would return. His racing to meet his son showed the outpouring of love and mercy that this father had for his son. This uncharacteristic action would also certainly draw attention to himself, to ease any ridicule that might be directed toward his son.

In covering the son with a robe and placing a ring on his finger, the father shows his forgiveness, and restored the bond and covenant that was broken. The party that began was a celebration of this fact. As the festivities begin, the parable turns to the older son, and again, the father goes out to meet him. The elder son meets his father with anger, filled with not only self righteousness, but also revealing that even though he remained with the father he did so with no joy. He too was looking for more from the father than the greatest gift he offered him, which was his relationship, his love.

The parable of the Prodigal Son ends with an invitation to all those who had gathered around to listen to Jesus. The tax collectors and sinners were invited to come home to their father, to turn away from their pursuit of the empty and false substitutes of wealth, power, pleasure, and honor. They were invited to be born again from their life of death, to be embraced as the children of God that they were and embrace their relationship and restore their covenant with him.

The Pharisees and scribes also were invited as was the elder son. They were invited to turn away from judging and instead celebrate the return of those who were seeking to come home, those who had been lost, but now been found. In doing so, they would realize that they too were lost. They were enslaved by the law and also separated from the loving relationship of God.

We are invited today too. Who do we identify with in this parable? Are we willing to recognize that the God of Jesus Christ has always been watching for us, always reaching out for us, always running out to meet us where we are, welcoming us as we are, and urging us to come home to be with him? God is running to meet us and embrace us. Will we run away from him or run to him?

Painting: The Return of the Prodigal Son, Bartolomé Esteban Murillo, 1667/1670